Summer Festivals in Morocco: Morocco is well known for being a land of coexistence and tolerability for several centuries.

And this can be felt in its rich mixed culture. Besides, Morocco’s festival calendar is booming with several interesting spectacles that host local and famous international artists, especially in the summer.

Morocco is always a good idea! But if you want to have a unique experience and avoid vacations representing classic sightseeing routines, Visiting Morocco in summer is your best option, given that you will have the chance to attend one of Morocco’s Top Summer festivals, things that will make you discover Morocco’s cultures and traditions through art.

From Mawazine, the notorious international festival held annually, to the prestigious film celebration in Marrakesh. Let’s discover the amazing spectacles Morocco has to offer

Mawazine Festival is one of the major Moroccan artistic events held every year during May for nine days.

The festival began in 2001 under the direction of his majesty Mohammed VI in order to encourage openness and dialogue and to promote the image of the Moroccan kingdom as a tolerant country.
As a matter of fact, the 2019 edition attracted over 3 million people making it the biggest African festival and among the biggest music festivals worldwide.
To have an idea of how huge the festival is, here is a list of well-known  musicians and bands  who performed at OLM Souissi Rabat, the main stage of the festival :
Evanescence, Whitney Houston,  Ricky Martin, Jennifer Lopez, Usher, Stevie Wonder, Shakira, Kanye West,  George Benson,  Maroon 5, David Guetta, LMFAO, and others
Usually, access is free to all areas in all stages, except VIPs

Essaouira Gnawa Music Festival is a festival well known for mixing Gnawa music and acrobatic dance during the performances.

The festival takes place each June in Essaouira and attracts an audience that can be estimated at over 500 000 people each year.
Besides Gnawa artists, the event features performances by international guests playing reggae, blues, folk, and jazz.

Also, the festival includes other activities such as literature, poetry, exhibitions, debates, and more.
And if you are already on a Morocco tour, visiting Marrakesh or Agadir, do not hesitate to attend at least one live show of the Gnawa festival

Marrakech International Film Festival is a Moroccan event created in 2001 by His Majesty King Mohammed VI.

It is organized each year by the Marrakesh film festival foundation under the chairmanship of His Royal Highness Prince Moulay Rachid.
The Festival is held in the red city, Marrakesh, bringing important figures from the world of cinema such as Martin Scorsese and Robert de Niro.
Each year the festival provides a large selection of different films shown to the public.
The main goals of the festival are to take the Moroccan cinema industry to the next level, encourage diversity, and finally renew the dialog between talents and intellects

Jazzabanca is a festival that hosts Moroccan and international jazz singers performing many jazz-fusion concerts. The festival is held annually in Casablanca.
In addition to the concerts, the public is able to meet artists and discuss with them (VIP guests), participate in jazz initiation workshops, or even improvised musical sessions.

The vibes felt there are almost like in an IBIZA party scene. And that’s what makes it among Morocco’s Top Summer festivals for youngsters

This unique Festival, which combines art, entertainment, and spiritual and intellectual energy, is held annually in the oldest imperial city of Morocco, between its historical walls.
This event promotes seminars and round table discussions in the mornings covering topics related to religion, art, and culture.

From the afternoon, till night, there are concerts including European classical, Arab Andalusian songs, Sufi ritual rhythms played by local and international performers.
In 2001, the festival was designated by Unesco as one of the outstanding events contributing to the dialogue on civilization

The Marrakesh laughter Festival is a famous 4-night event broadcasted on Moroccan and French television.

Producers invest nearly 3 Million euros to offer a real show to Marrakesh residents and tourists who book their stay in Marrakesh during this period to attend the magical festival.

as a matter of fact. The festival welcomes 250,000 spectators each year in the huge courtyard of the El Badi Palace.
The franco-Moroccan star, Jamal dabouz created the festival, and he is always the host of the event.

L’boulevard is a Moroccan Urban music festival held on open-air stages in Casablanca, allowing young musical talents and graffiti artists to gain notoriety and exposure thanks to competitions named Tremplin(for musicians and bands) and Sbagha Bagha (for graffiti artists)
Over the years, this event was the point of departure for today’s Moroccan famous rap and rock superstars. 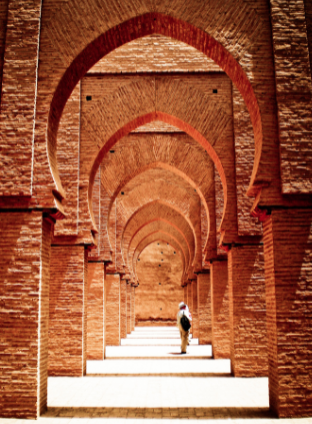 Previous article6 Top Outdoor Adventure Activities to do in Morocco
Next articleTransportation in Morocco : Best means to get around Morocco