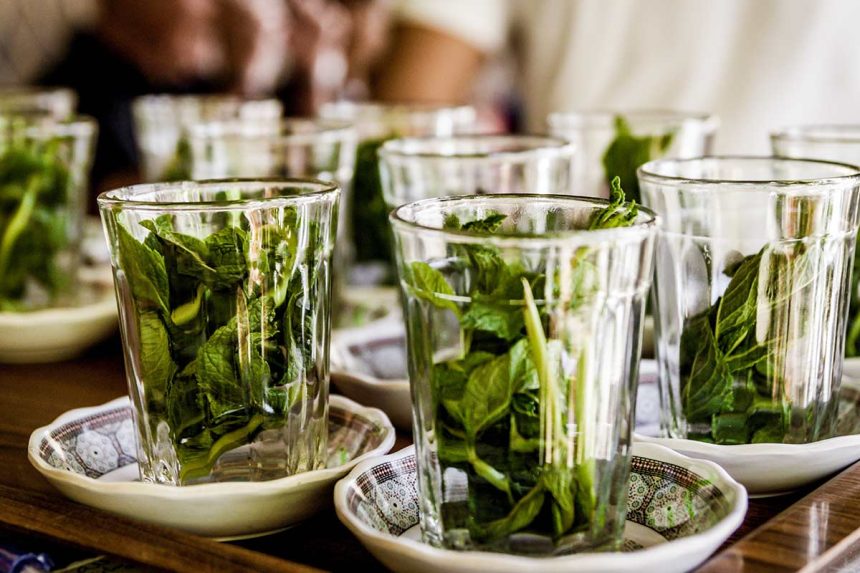 Morocco is undoubtedly one of the richest countries when it comes to culture, history and diversity, and Moroccan cuisine does not make the exception. In Morocco, although the people are from different backgrounds and regions, they all share one common ground; taking pride in and absolutely adoring Moroccan food, so much so that it’s expected for Moroccans to set up dates based on the timing of their meals, for instance: “we can meet up after lunch” is nationally understood.

Contrary to popular assumption, Moroccans don’t only have the world renowned Moroccan Tagines, mint-tea and the unique sweets throughout the day and for all meals. Moroccan cuisine has such a diverse set of choices and each has its appropriate time, place and setting to be had.

The day for most Moroccans starts with the first call for prayer at dawn, and with it begins the consumption of the Moroccan cuisine; food and drinks, usually around that time it’s a cup of mint-tea will do, then a more nutritious breakfast a few hours later. Then around midday Lunch is served, during the evening it’s tea time again accompanied by some sweets and snacks, then the day ends with dinner served usually relatively later on.

And although meals are served at a particular time, all the time is tea time in Morocco!

Moroccan cuisine: what to serve for breakfast

For Morrocans, and tourists alike, one of the most exciting parts of each morning is looking forward to seeing the breakfast served on the table after the different and delicious scent of the freshly prepared food had filled the house or cafe.

Nothing beats the scent of freshly baked Moroccan bread, known locally as Khobz, the crown jewel of Moroccan cuisine; as no meal is complete without it, especially when it’s served with Moroccan mint-tea, and olive oil.

Eggs also have a regular appearance in Moroccan breakfast; scrambled, omelets, fried with olives or khaliae, which is a type of dried meat and serves like the Moroccan halal bacon. Often served with either tea, orange juice, or milk to wash the delicious food down.

If you have a sweeter tooth, then Moroccan cuisine won’t disappoint. Msemen or Bagherir, which is a Moroccan crepe, usually comes with sides of jam, honey, or butter, and it tastes amazing! Another option would be Sfenj, the Moroccan donut, best eaten while hot and dipped in sugar. And if you prefer fruit in the morning, then a fruit salad containing bananas, oranges, apples, and seasonal fruit, either in yogurt or freshly squeezed orange juice.

Moroccan cuisine: what to serve for lunch or dinner

Morocco‘s food suits all tastes, and there is no wider variety than the one of Moroccan lunches or dinners; it can go from traditional Moroccan tagines to Berber meals, to fast-food sandwiches. And from, meat to fish, to green salads. As long as you keep your options open, Morocco won’t disappoint. Here, we’ll be covering the meal to seek in particular regions or areas.

If you find yourself in Fez city, then trying Pastilla is a must! The dish has two mouth-watering versions; the first is the pegeon and almond one, locally called “the sweet pastilla” as it is served with poudered sugar on top. The second version, is the seafood version stuffed with vermicelli noodles shrimp, calamari, and fish, known as “salty pastilla” or “fish pastilla”.

And if you are in Marrakesh, and you end your stay without having Tanjia at least once then your trip wasn’t complete! Tanjia is a Marrakech delicacy that can be made at home (traditionally by men) or by a local butcher slow-cooked over the same coals that heat the hammams. The tanjia pot is wrapped securely with butcher’s paper before roasting for up to eight hours with beef, lamb, or chicken with a combination of spices and preserved lemons.

If you are on the coast side, we strongly advise for fresh seafood, the menu will be as wide as the ocean itself, and as diverse as Moroccan cuisine. Either fried, cooked with tomato sauce or grilled and served with lemons and with different salads as sides; you’ll be grateful for the experience!

Without forgetting of course the two most famous dishes of the bunch; Tajines, and Couscous.

The latter, couscous, is often served after the midday Friday prayers, typically in a big circular dish that gathers the entire family. It is traditionally adorned with seven vegetables on top; including eggplant, courgette, carrots, pumpkin, potatoes, onions, cabbage, chickpeas, and meat or chicken. Couscous is frequently accompanied by a glass of Leben to wash it down (fermented milk), as it’s frowned upon to have any other drink with couscous (not even water).

When it comes to Tajines, from lemon chicken tajine with green olives to kefta (meatballs) with eggs, in Moroccan cuisine there’s something for everyone. A Berber tajine cooked with in-season vegetables in the Atlas Mountains comprises peas, zucchini, tomatoes, and potatoes, as well as maybe poultry or beef buried behind the mountain of veggies. When scooped up with fresh bread, it’s sheer bliss.

Some of the meals cited above are localized, while others are completely national, and harira soup is unquestionably the common meal of all Moroccan cuisine. This Moroccan favorite, which is available all year but is especially linked with Ramadan, is a hearty chickpea, tomato, and lentil soup usually thickened with eggs or veggies. It’s one of those dishes that everyone thinks their mother cooks better than anybody else, and in their own way, they might be right.

It wouldn’t be a trip to Morocco, or a normal day for the locals, without sampling some of the finest homemade patisseries paired with Moroccan mint-tea.

Since the evening meal is frequently a late event, you may wish to refuel in the middle of the afternoon. Take a break with some mint tea and pair it with one or a few of the plenty goodies and snacks available. Cookies come in many shapes and sizes, and you’ll regularly see a cookie vendor walking about the medina with his tray. The Corne de Gazelle, a crescent-shaped sweet biscuit filled with an almond paste perfumed with flower water, is the most traditional of them. A more substantial Sfenj – a Moroccan doughnut – from a passing street seller could attract you. Briouats are another delicious nibble, usually made with almond paste, dipped in raw honey, and fried.

These pastries are one of a kind, distinguishing Moroccan cuisine from any other in the world, and when accompanied by Moroccan mint-tea, then it’s a match made in heaven!

5 Social Etiquette In Morocco You Should Know Before Visiting

Is Morocco expensive for travelers? 2023

Posted by Kenza Tazi
Follow:
Kenza TAZI is an ambitious and eager Moroccan young woman, who believes in positive impact, world citizenship, the importance of kindness and the power of youth.
Leave a comment