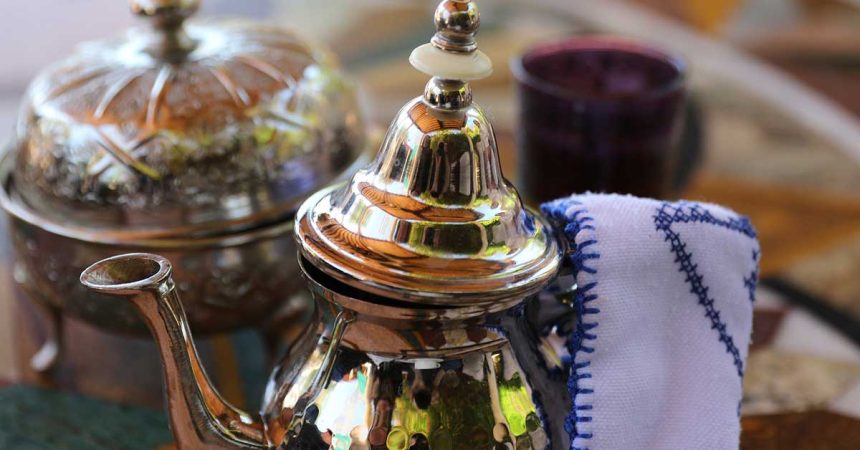 Moroccan mint tea, known also as “Berber Whiskey ” or Maghrebi Mint Tea is one of the columns of Moroccan tradition and the Moroccan cuisine.

In Morocco, tea is drunk all times of the day when they are alone or with their guests. They also drink tea in all occasions whether they are happy occasions such as celebrating a birth and a wedding ceremony or sad ones such as death. When they eat meals with each other, they also drink tea. Don’t be surprised if you hear that Moroccans drink tea 20 or even 30 times every day. It is worth to mention that they drink tea slowly without any hurry.

Souad, a teacher, and a master of La Maison Arabe‘s tea event points at the Moroccans’ view of drinking tea stressing the fact that making tea isn’t only about heating the water and putting mint. It is much more than that. It is a ritualistic art, a rite for them, just like it is for the Chinese or Japanese. Souad is a leader of a tea event that is partial of the cooking tutorial lessons that are provided by La Maison Arabe every day.

Moroccan tea has both therapeutic and beauty advantages. These herbal teas are plant-based that they are planted in Morocco, in its various kingdom which incorporates different natural herbs. In this kingdom, you can find over than 4,200 kinds of plants that are described as indigenous and 400 that are categorized as items for therapeutic or scented and perfumed usage.

Morocco’s convention of tea goes back to the 12th century BC. There are different assumptions on the beginning of tea in the Maghreb. A few claim that the Berbers “Amazigh” brought tea from Asia. On the other hand, other people suppose that Queen Anne Stuart of great Britain, offered tea to the Moroccan Sultan as a tactic or strategy to liberate British captives.

It was in the 17th century, during the reign of Sultan Moulay Ismaïl, that tea made its debut in Morocco. The English ambassadors offer some as a gift to the Court. It is then a rare drink, reserved for the Sultan and notables.
However, in 1854, the British saw their tea exports to Slavic countries interrupted by the Crimean War. In search of new outlets for their tea plantations in India, they then turned to Morocco, very accessible from Gibraltar. From then on, tea became part of the daily life of all sections of the population, especially since Moroccans were already consuming infusions of aromatic herbs.

The traditions of Moroccan Mint tea are transferred from one generation to another. You can see this rite of Moroccan tea in Morocco’s houses or in tutorial cooking lessons or even in Kasbahs. If you question any Moroccan about past recollections of their childhood, they will immediately recall the picture of their mother in the kitchen preparing a mint tea from herbs to avoid or to fight off a cold or to enhance the digestion of her family members.

In every glass of Moroccan Mint Tea, you will have three main components that are : Gun Powder, Beetroot Sugar and Spearmint.

If we consider the frequent times at which Moroccans drink tea, we will be astonished at this amazing fact which is that tea isn’t sown and planted in Morocco. But it is brought from China.

The basic element of Moroccan mint tea is gunpowder. It is similar to real gunpowder and appears just like coiled little balls. Despite the fact that gunpowder is identical to green tea, it savors substantially stronger than the kind of green tea that the majority of people are acquainted with. Especially when it is mixed with herbs or mint, gunpowder’s strong and fuming, smoked flavor adds a special and distinct taste to the tea.

A second significant component is sugar. But it isn’t actually any kind of sugar. Moroccans add a little portion of healthful Beetroot sugar to increase the taste of their tea.

Beetroot sugar is planted in Morocco and it is derived from the Beetroot crop which is full of minerals and vitamins. You can’t find any person in Morocco who drinks tea with no Beetroot or cane sugar. It is something unusual. On the other hand, these days a larger number of Moroccans are consuming tea with little or without adding any sugar because of the foreign impact nowadays. As for its taste, you will find Moroccan tea without sugar as more bitter and with a stronger tasting. The mixture of gunpowder and mint with no sugar give the tea a pungent taste.

Despite the fact that there are many various types of mint planted in Morocco, the constant option is Spearmint, because of its explicit, bitter and mild scent turning it into the conventional option that is consumed in Moroccan mint tea tradition.

You can find several kinds of teas that are drunk in Morocco such as conventional Moroccan Mint Tea and other kinds of tea that are used for healthful advantages. Traditional Moroccan Tea is normally drunk without any additional components. Other people who choose to consume tea for the sake of their health in Morocco will add many fragrant herbs to their tea. Few of these fragrant plants are dehydrated roses, such as the petals of flowers in addition to lemon and orange rinds, and orange flower water.

The admixture of also Moroccan tea has several effective components like vitamins, antioxidants that are anti-inflammatory ingredient and it has many characteristics to enhance strength and patience. It also helps you to digest food and enhances your intellectual efficiency. In addition to its efficiency in prohibiting the increase of bacteria and even cleaning up any skin diseases. Antioxidants in tea aid enhancing patience, saving you from any cardiovascular illness or particular cancers.

How to prepare Moroccan mint tea

Reiterate this process two or three times for excellent outcomes.

When you serve the tea, it is essential to put it in a Moroccan teapot and carry the grip from a high position , because this process will add oxygen to the tea keeping it foaming at the top of the glass. The altitude at which the tea poured should be at least twelve inches, creating foam on the top of the glass of tea.

Morocco as a Destination for Vegetarians and Vegans